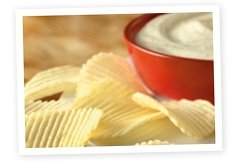 What's In The Box?

Aren't all fried foods unhealthy?
Actually, no. Frying itself isn’t unhealthy - it’s the type of oil in which the frying is done that matters. Certain oils, such as tropical and partially hydrogenated oils have saturated fats or trans fats, which are considered “bad fats.” But Frito-Lay chips are fried in better oils like corn, canola, and sunflower oils, which contain 80% or more of polyunsaturated and monounsaturated fat - the “good fats,” 20% or less saturated fat, and 0 grams trans fat.

What's in your chips, anyway?
Our most popular snack chips are based on three simple ingredients: potatoes or corn, oil, and salt and have no preservatives. In our seasoned chip varieties, the seasoning makes up less than 5% of the ingredients in our chips. Another ingredient fact: all Frito-Lay potato chips are a good source of vitamin C (10% of your daily value) derived from the potatoes.

Frito-Lay makes salty snacks, so aren't they high in sodium?
Actually, no. Chips have comparable sodium per serving to many other foods, like a slice of white bread, crackers, or even cottage cheese. In fact, Frito-Lay chips account for only about 2% of the sodium consumption in the U.S. Salty snacks taste salty because the salt is on the surface of the chip, not because they are high in sodium. Other foods like crackers have the salt mixed and baked in so they don’t taste as salty. The primary source of sodium in the U.S. diet comes from common foods like bread and cheese.

$5.97
Add to Cart
Add to Wish List
Compare this Product

$5.97
Add to Cart
Add to Wish List
Compare this Product

$5.96
Add to Cart
Add to Wish List
Compare this Product