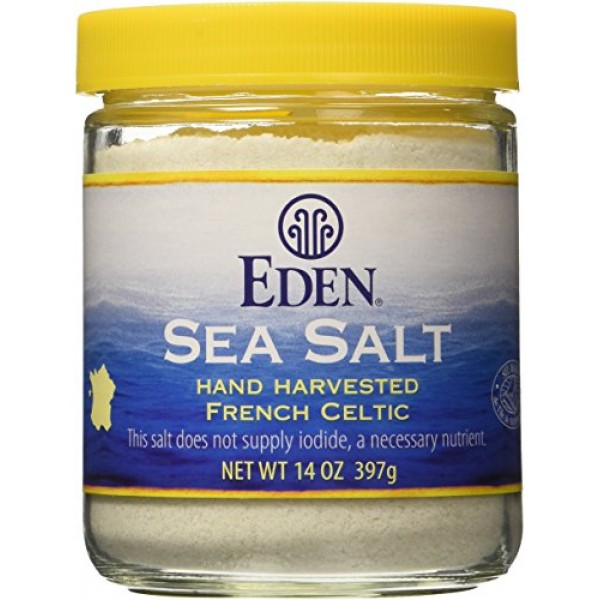 Eden Foods Sea Salt French Celtic - 14 oz (397 g) Eden Foods Sea Salt French Celtic is lower in sodium and higher in calcium than other salts. This gives a smooth, savory flavor. Eden Foods Sea Salt French Celtic is sea salt in its natural state with trace elements almost identical to the sea. Iodine is not stripped out and then 'fortified' back in. Eden Foods Sea Salt French Celtic is packed in glass to protect it from absorbing moisture. EDEN Sea Salt is certified by ACTOA (L'Association de Controle Tiers Ouest Atlantique), "Selection du Saunier." This organization certifies that the region of Noirmoutier maintains a pure, unpolluted environment suitable for organic agriculture and also respects the Standards of Salt. Atlantic waters flow into Noirmoutier's rectangular, hard sun-baked man-made clay pools. Two days of evaporation from sun and wind create large coarse crystals called 'sel gros'. The crystals are light gray from the clay. They are harvested by the 'saunier' or salt harvester using long rakes to gather the crystals. Using strong, swift strokes the saunier draws crystals to one side of the pool. Every two days the saunier collects small amounts and adds it to the pile that becomes several feet high as the harvest season progresses. The coarse salt is dried and stone ground to medium size to produce Eden Foods Sea Salt French Celtic. No further processing, washing, or additives are involved, and it is never blended. This traditional Celtic process seals in a wealth of trace elements and produces the most delicious sea salt in the world. Noirmoutier islanders take pride in the purity and taste of their salt, just as citizens of Bordeaux take pride in their wine. Their craft has been handed down through generations and the island possesses unique qualities producing one of the most exquisite salts in the world. Frequently Asked Questions: Does Eden use any chemical additives, preservatives, or chemical or Genetically Engineered derived 'processing aid
Add to Wish List Compare this Product

$16.79
Add to Cart
Add to Wish List
Compare this Product