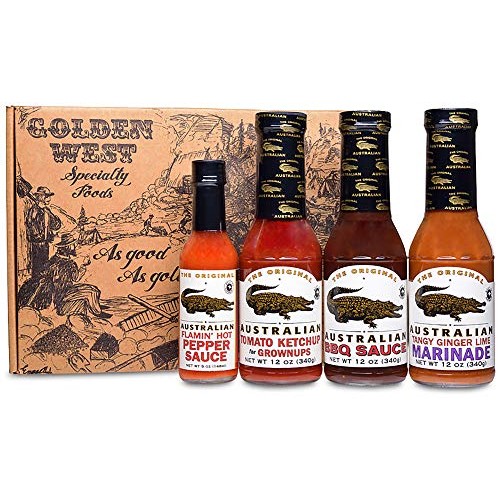 A Taste of Australia! The complete gift set for those who love the flavors of down under. Each Gift Set includes four items from the Original Australian BBQ Sauce Company. These sauces are the brainchild of Chef and BBQ Grill Master Garry Sullivan who has won numerous BBQ Cookoff awards in Kansas City and elsewhere.

Garry Sullivan was one of the first noted Australian Master Chef's to train through the original "Le Cordon Bleu" in Paris as part of his Culinary Degree from William Angliss Institute and continued on to work at top restaurants throughout Europe until 1976 training with the best Chef's in the the World. On returning to Australia and became an original member of the "Australian Guild of Professional Chefs" and having recently been awarded "Black Hat" honorary status (2015) and in 1976 opened his first Gastropub in Port Melbourne, Victoria, Australia. He was invited to work with Michael Roux and Paul Bocuse in Melbourne on 2 separate occasions and assisted showing Australia their famous culinary styles. He then continued to open restaurants in Melbourne, Sydney, Gold Coast and Cairns in Australia.

During the 80's and 90's Chef Sullivan won many awards for his outstanding barbecue sauces, ribs and mustards in the USA and Canada. In addition to these awards, he was honored to be on the NBC 'Today" Show, Live from Memphis and TV and radio appearances in other states visited by the World BBQ circuit, discussing and explaining his unique style of Australian BBQ . With 50 Awards in the USA and Canada Chef Sullivan decided then to take his products to the world.

These incredible sauces are Chef Garry Sullivan's brainchild. They bring the rich, long and complex history of Australian BBQ to your palate.

Enjoy these sauces, or, better yet, gift them to someone else. You will be forever thanked!