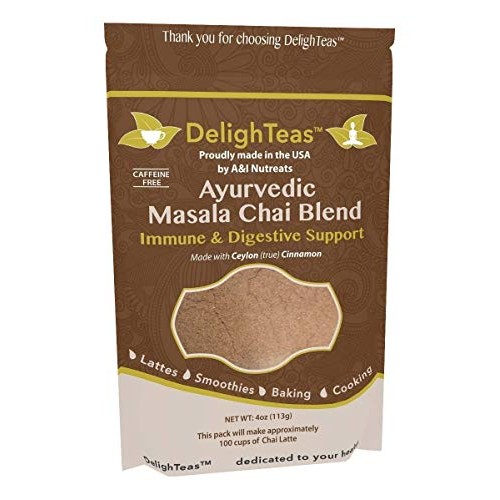 Originated in India, Masala Chai (also known as Chai Latte) has long been used as a healing Ayurvedic beverage. The synergy of the spices in this blend creates a powerful tea that helps support digestion, enhances the immune system and is loaded with antioxidants.*

Masala Chai is an easy way to enjoy the healthy benefits of these wonderful spices while satisfying the taste buds at the same time. Enjoy it as a morning kick-start, midday pick-me-up or after a heavy meal to support digestion.*

For those who are not familiar with Ayurveda - known as the "Science of Life", it is a natural holistic healing system that was developed in India more than 5,000 years ago, addressing all layers of the mind, body, and soul.
According to Ayurveda, strong digestion is a key for an overall good health. Disease first shows up on the body within the digestive tract, accumulates there and if continues to accumulated, moves into the deeper tissues. In Ayurveda, health is defined as the dynamic state of balance between mind, body, and the environment; it is possible for each of us to achieve and maintain a vibrant and joyful state of health by identifying our mind/body type and then creating a lifestyle that sustains and nurtures our unique nature.

* These statements have not been evaluated by the Food and Drug Administration. This product is not intended to diagnose, treat, cure, or prevent any disease.

$20.86
Add to Cart
Add to Wish List
Compare this Product

$217.50
Add to Cart
Add to Wish List
Compare this Product

$23.46
Add to Cart
Add to Wish List
Compare this Product