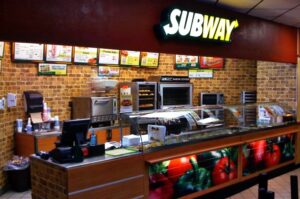 SUBWAY Fresh Eats is a chain of bakeries and cafés that operates in the US, as well as in the UK. The company markets its retail bakery products under the SUBWAY® label.

SUBWAY Fresh Eats was founded in Bridgeport, in the state of Connecticut in 1965. Fred DeLuca, SUBWAY’s founder, was 17-years old when he thought of opening a submarine sandwich store. The idea came to him when a family friend suggested that he open a sandwich shop, as those kinds of stores gained huge success in his hometown.

Dr Peter Buck, the same family friend who gave the suggestion to him, lent DeLuca a thousand dollars so he could start his small business. Dr Buck and DeLuca became partners in the new “Pete’s Super Submarines,” which was opened in August of 1965. The first year proved to be a challenge, as well as a learning experience for the young entrepreneur. However, a year after opening the first shop, they opened a second one. Soon, a third outlet was opened. This outlet was located in an area that allowed it to be very visible. The shop’s name was then shortened, from “Pete’s Super Submarines” to just SUBWAY®. The company’s bright yellow logo was also introduced at the same time.

DeLuca’s next plan was to create a business scheme that sketched the goals of SUBWAY® chain. In order to achieve those goals, SUBWAY® began to accept franchises, thereby giving other aspiring entrepreneurs the opportunity to succeed in their own ventures in business. SUBWAY®’s first franchise was opened in 1974, in Connecticut.

In the UK, Maria and Murray Speirs opened the first SUBWAY® franchise. This SUBWAY shop was located in Brighton. In 2001, Fred DeLuca himself attended SUBWAY®’s first UK media tour. This was also the year that SUBWAY® reached a total of 50 stores. During the media tour, DeLuca announced that the company’s goal was to reach 2,000 SUBWAY® shops by the year 2010.

In 2002, SUBWAY® opened its 100th store in Ireland and the UK. By July of 2003, the chain was considered one of the biggest specialist sandwich chains in Ireland and in the whole of the United Kingdom. In the middle of 2004, there were a total of 300 stores and by the end of the year, the number of stores was upped by 50.

By the middle of 2005, SUBWAY® had 500 stores. A year later, the 600th store was opened in Huntingdon. At the time, SUBWAY® had more stores in the UK than KFC, Burger King or Pizza Hut. In January of 2007, SUBWAY® was given the number one spot in the yearly “Franchise 500” rankings of Entrepreneur magazine. By July of 2008, SUBWAY® had more than 1,250 stores all over Ireland and the UK. The company continues to expand at an impressive rate, averaging about 6 stores opening every week throughout Ireland and the UK.